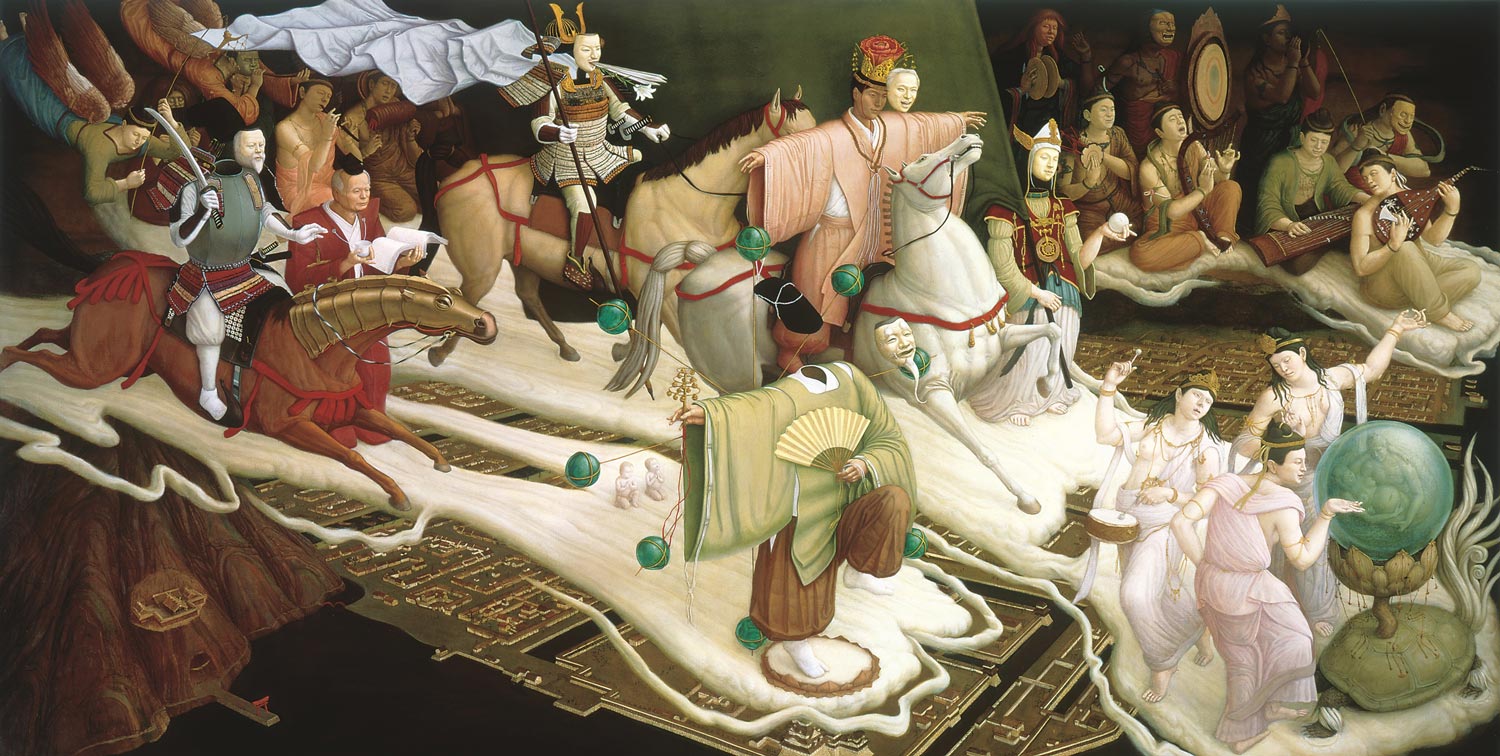 The Lotus flower is the most enduring flower symbol in a variety of Eastern cultures. A plant born from extremes, with one foot rooted in the primordial mud, the dark soup of life, it stretches up from this blackness to briefly bloom in the sunlight, before sinking back from where it came.

In Buddhist texts lotus flowers are associated with expressions of purity, rebirth and the cycle of life. A lotus that is pink carries the message of the supreme spiritual realisation of the Buddha, and a red flower is symbolic of the purest expression of love and compassion. In Himeno’s painting there is red lotus resting inside the crown of a central figure, the feudal prince on his war horse in this procession in the clouds.

A closer look at the composition reveals more ambiguous and surreal themes. There are fusions of different Eastern religions, sacred dances, musicians, headless figures, floating masks, babies, Renaissance angels (to the rear), swords and flowers emerging from mouths, mysterious green orbs on cords and worlds within worlds carried on a tortoise’s back, from which another lotus plant grows.

There is an epic story being played out which seems to link and fuse human experience across all the ages. There is something Kabbalistic in the cross-over of esoteric religious themes, with strong links to the mysteries of Shinto religion here, with clues of the spirit Kamis, which inhabit beings, plants and animals, and are part the Nihonshocki ( the chronicles of Japan) which explain the creation of gods, people and the customs of life.

From conversation with Himeno, who is a contemporary artist based in Berlin, and associated with Leipzig School of Artists, I have been lucky enough to learn at first hand, what inspired his vision of this back in 1997. Firstly, he was inspired by reading the works of the Japanese philosopher, Toshihiko Izutsu, and his account of the more mystical elements of Zen Buddhism, Islam and his understanding of the unconscious fields of life. The production of this painting also coincided with the profound feelings the artist discovered within himself upon the birth of his daughter.

In this sense, Himeno is not only the painter of this image but he is also the involved subject within a painting which responds both on a deeply personal level and also on an epic scale. The artist is the prince on horseback, with the red lotus blossom as his headpiece (his inexplicable love) carried forward in the procession of life, through the sacred world around him.

Shinji Himeno is represented by Galerie Schwind in Leipzig, Frankfurt am Main and Berlin.